We would like to convey our deepest sympathy to those who suffered devastating damage in the Great East Japan Earthquake and pray for the quickest possible recovery. 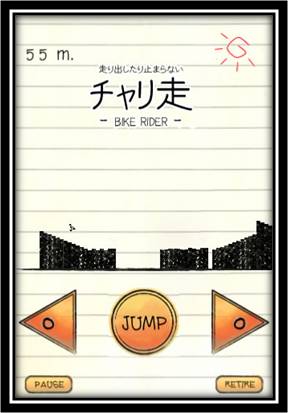 The award applauds that the application became the precedent that shows the mobile content developed in Japan can gain global popularity.

Regarding an application "Bike Rider" ranking top in 44 countries.

"Bike Rider" is a one-key game in which a bicycle runs, jumps and climbs over mountains and cliffs. In 2007, a college student Yuta Hoshino, also known as "Gomidouji," (Photo↓) created and posted "Bike Rider®" on AppliGet. That same year, he posted a sequel, "Bike Rider® 2nd," which became a big hit particularly among high school students.

In the summer of the same year, under the user collaboration plan, the "Bike Rider® Zenkoku-isshuu" (Ride around Japan) featured in the bimonthly mobile application magazine "AppliGet®" published by Spicysoft, was delivered as a commercial product on Docomo's official site "AppliGet®DX."

Today, the application is delivered as a mobile application, including i-appli for Docomo, S!-appli for Softbank, BREW-appli for au. The game is also delivered in Flash version corresponding to 3-carrier, and as a social game in a smartphone version for iPhone and Android.

In the approximately four years since the game was first released, the total number of downloads exceeded 15 million, making it the biggest mobile game application hit.

"I am very happy to receive such a prestigious award. Bike Rider's winning high praise for the smartphone tells me that fun is the essence of mobile games. I hope that smartphone applications developed in Japan will spread throughout the world by using this opportunity as a booster. I hope to continue to create more games that thoroughly explore the fun." (Mr. Hoshino)

We accept inquiries about the topics listed below, regardless of whether they are related to this news release. We are ready to offer help in wide ranging areas in order to support creators and their creative activities, and for the development of the entertainment industry. Individuals (bloggers, students, etc.), corporate bodies (media, publishers, production, educational institutes, etc.) are welcome to make inquiries regarding our service.

*Information about rankings and reviews by AppliGet are provided via media such as Internet, TV, radio, newspapers, and magazines free of charge. (some are provided for a fee)

*Spicysoft is ready to respond to requests for interviews, presentations and speeches regarding Internet, mobile, applications, games and manga by our president, CTO, and editors for AppliGet and MangaGet. Visit the Spicysoft "publicity" website to learn more about our activities.

* Spicysoft is ready to respond to requests for support from students and educational institution free of charge. We dispatch our president, CTO, and editors for AppliGet and MangaGet to teach classes or to sponsor and/or participate in school festivals.